Interbiuro design & fit-out company invites the real estate industry for a special screening of “The Traitor” movie.
Add your opinion

The movie directed by Marco Bellocchio is based on a true story about a famous case against the Italian Cosa Nostra criminal organization, which ended with a triumph of the country over the powerful mafia; over 300 bosses of the Sicilian organization were sentenced. The protagonist is Tomasso Buscetta, a mafia boss, who decides to break an omert, i.e. a conspiracy of silence.

The movie nominated for the Golden Palm in Cannes is directed on a grand scale. The investigation concentrates on the transition of the protagonist; he transforms from one of the mafia leaders into a hated and hunted traitor.

The screening will be announced by Tomasz Raczek.

Interbiuro invites to Muranów cinema on February 27 at 8 pm. The media patron is e-biurowce.pl.

“The Traitor” is another special screening organized by Interbiuro and Gutek Film distributor. The experts from the real estate industry are invited to participate in the event.

Source:
see last
You enjoyed article? Sign in for the newsletter!
Fill out your e-mail, to recive our newsletter.
Be the first to comment
More on topic:
Related companies 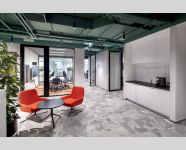