View gallery
According to the analyses conducted by Walter Herz, Krakow is an undeniable leader of the regional office markets and the resources of modern office areas in the city amounts to 850 000 sq. m. The most dynamically developing districts are Podgórze, Grzegórzki or Prądnik Czerwony.
Add your opinion

There is no only one business center in Krakow; offices are built in different districts and Grzegórzki, Prądnik Czerwony or Podgórze arouse the greatest interest among developers. The new office buildings are the response to the high demand. According to the analyses conducted by Walter Herz, Krakow has one of the lowest vacancy rates in the country, which amounts to ca. 6 per cent. The main tenants of the offices in Krakow are usually companies from the sector of services for business. The Association of Business Service Leaders in Poland (ABSL) informs that more than 50 thousand people are hired in the BPO, SSC, IT and R&D centers within the agglomeration.

Podgórze is a distinctive district on the Krakow office market. A relatively high number of office buildings is realized in this part of the city. Podgórze used to be associated with the post-industrial areas and the change in perception is related to development of the business infrastructure.

The 19th century was the period when the industry in the region of Podgórze fully flourished. It was a place where industrial plants were located and the presence of mineral resources additionally favored the establishment of new enterprises, quarries, etc. The district changed substantially in the period of the Polish People’s Republic, when Podgórze started to be perceived as the neglected area of Krakow. However, the district has recently been revitalized by new investments. At present, it aspires to recover the status of the innovative part of the city. Apartments, commercial and service buildings as well as offices successfully adapt the post-industrial and neglected areas of Krakow and change them into a fashionable post-industrial district.

Bonarka for Business is situated on the post-industrial area and it constitutes one of the largest revitalized areas in Europe (more information: B4B constitutes the next stage of the complex revitalization). The Krakow’s Podgórze district used to be a dilapidated area in Krakow, however, now it is one of the most dynamically developing districts in the city thanks to the opening of several cultural institutions, development of residential areas and intensive development works conducted by TriGranit – says Tomasz Lisiecki, Chief Investment Officer of TriGranit, during the interview with e-biurowce.pl. B4B is a laureate of such competitions as "Krakow – my home 2014", "artURBANICA 2012 Quality Award" in the architecture of public space category, as well as ”Prime Property Prize Małopolska 2013” in the office category.

The B4B office complex is situated in the very heart of the multifunctional city center, that is Bonarka City Center. TriGranit has always been known from the so called multifunctional development as well as public centers. We are enthusiasts of multifunctional city centers such as Bonarka, which creates a new district in the life of local society. Numerous restaurants, events, or the cinema make that the Bonarka shopping center is a place where it is easy to do shopping or to spend free time after work or during a weekend. Additionally, this city center offers many facilitations to all employees of Bonarka for Business, which makes the every-day life easier, whereas restaurants are good places for business meetings. In spite of the fact that both land rehabilitation and revitalization of the dilapidated area requires hard and long work, these additional endeavors are definitely worth it – all our areas for the new development are currently one of the most popular and successful city centers in both given region and local society – says Tomasz Lisiecki, Chief Investment Officer of TriGranit.

Office designed as an eco-friendly building

Green Office Center is situated in close proximity to Bonarka for Business. G.O. Center has 7 aboveground tiers and one underground tier, where the garage is situated. Biuro Projektowe INDO is responsible for the project of the building. Green Office Center is characterized by the glazed elevation in the form of aluminum and vertical "razor blades", which refer to the functional modernism.

Green Office Center is distinguished not only by interesting architecture but also by numerous solutions which are consistent with the idea of sustainable construction. The investor introduced e.g. system methods on limiting the energy consumption, access to the natural light and external views, the individual control of temperature and ventilation based on VRF Mitsubishi Electric, energy-saving heating and cooling systems, LED lighting of common areas, or modern system of maintaining the appropriate air humidity. 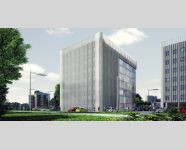